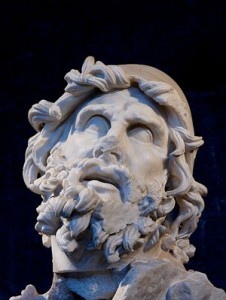 Depicted here, Odysseus was one of the greatest of the Greek heroes who fought during the Trojan War. Known for his cunning intellect, Odysseus crafted the plan that destroyed the city of Troy and ended the Trojan War. The story of Odysseus begins in Homer’s epic poem The Iliad, but his second poem, The Odyssey, relates the tale of Odysseus wandering the seas for ten years as he struggled to return from the Trojan War.

Odysseus ruled Ithaca, an island kingdom. Penelope, Odysseus’s wife, had borne him a son, Telemachus, just before the events of the Trojan War began to unfold. Odysseus was favored by the goddess Athena for cunning and intellect. Odysseus is also known as Ulysses, which is the Roman form of his name.

A prophecy stated Odysseus would stay away from home for a very long time if he joined the Greek army and attacked Troy. Odysseus loved his wife and newborn son. He did not want to leave, so he pretended to be crazy when the Greek army came to call. He yoked a donkey and an ox together and plowed the seashore. One of the Greeks placed Telemachus in the path of Odysseus, who swerved to miss the baby, revealing the farce. Odysseus left Ithaca and his family to fight at Troy.

The war with Troy lasted for ten years. Following the death of the Greek champion Achilles, Odysseus devised a plan to enter the city and end the conflict. Here is where the cunning of Odysseus shone through. Odysseus had the Greek army build what came to be known as the Trojan Horse, a giant hollow wooden horse to give the Trojans as an offering of peace. Inside the body of the horse, some of the best Greek warriors hid. 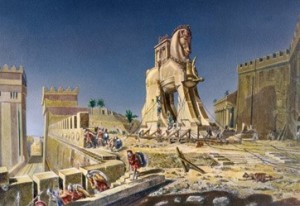 The remainder of the Greek army boarded their ships and sailed a short distance away from the city and out of sight. The Trojans rejoiced at the supposed end of the conflict and brought the horse inside the city walls. At night, the Greek warriors emerged from the horse and opened the gates of the city to the waiting Greek army. The city was taken by surprise and destroyed. There is a common saying derived from this event, ‘Beware Greeks bearing gifts.’

During the sack of the city, the Greek army desecrated the temples and altars of the gods, angering the gods. Upon the departure of the Greek army, a fierce storm caused by the gods scattered the Greek fleet. Odysseus and his men were blown off course, and this began a 10-year struggle to return to Ithaca.