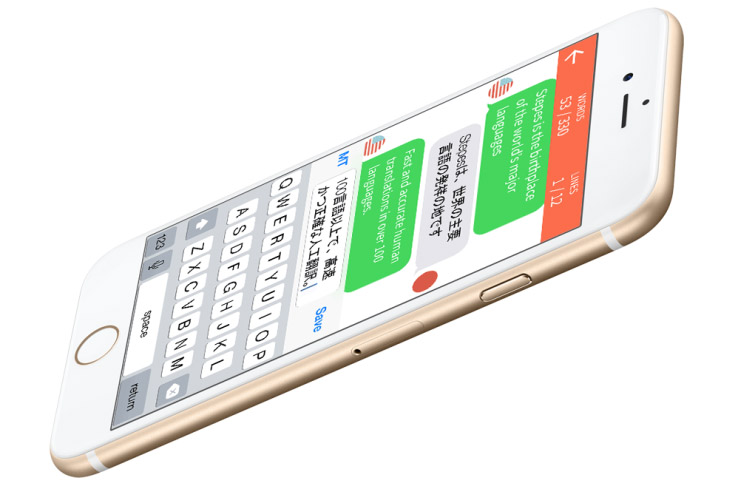 CSOFT is drawing on its 10 years+ of translation services expertise, including a crowdsourced glossary for industry/topic specific nomenclature, called TermWiki, which it launched around four years ago, and the circa 100,000 translators already on its books. So Stepes is not a typical startup, but rather a new venture by an old (in tech terms) translation software company drawing on some up-to-the-minute app interface trends to tackle a specific problem.

That problem? How to deliver translation services via smartphone — and thereby unlock a potentially massive market of bi/multilingual people to grow the number of translators available for on-demand translation work (and thereby grow the overall size of the translation pie).

Instead of Stepes just being targeted at the circa 2100,000 professional translators it says are currently working in the field, CSOFT is eyeing up something like half the world’s population (aka the total number of bi/multilingual people) as potential users of its app. So yeah, pretty ambitious stuff.

Yet look at the hundreds of millions of users mobile messaging platforms like WhatsApp have managed to acquire and you can see the logic. Thinking being: you don’t have to be a pro translator to be able to apply language skills to translate a few snippets of text if you have a bit of downtime and your phone to hand. As many people surely do.

Making an app that’s easy enough for anyone who can speak more than one language to use to translate text on-demand is why they fixed on using a mobile messaging interface, says Carl Yao, Stepes’ VP of global strategy and development. The app also supports text to speech, so users do not necessary even need to be able to type to take a translation job on the platform.

On the demand side, CSOFT’s rational is there are plenty of smaller businesses that would like to be able to localize their content — if only it didn’t cost so much time and money to do so. “Translation is still too expensive, and is too difficult to get… Because Stepes is making the whole translation process so much easier we think it’s going to unlock this whole pent-up demand for translation,” he argues.

CSOFT started work on Stepes around March this year, settling on using a mobile messaging interface several months in — after trying to figure out how to make the translation workflow viable on mobile devices. Translating large amounts of text on a small screen demands a bite-sized approach, reckons Yao, while making translation more accessible generally means simplifying the tools.

“All the previous translation software is mostly desktop-based, which means they’re not available on a mobile. Not only that, a lot of the software tools are becoming increasingly difficult to use because of the [html] tag manipulations [and other text formatting requirements]… It’s really making the translation process very difficult for just anybody,” he says.

“Stepes makes translation available on mobile for the first time and makes the whole translation task very easy — so that we think is a big, new advancement… [It] makes the translatable text just like what you normally see in a chat message — just the straightforward sentence, no tags to worry about.”

“It took a long time to figure it out,” he adds. “We were thinking that the fact that nobody type long emails on their mobile… Same thing nobody writes dissertations on their mobile. So that’s why a lot of these other translation software companies just don’t bother with mobile — they think it can’t be done. So we had to address that issue and come up with a viable solution to make sure that this whole translation experience is good and is efficient.”

CSOFT has filed multiple patents to try to defend its approach here, including for the app’s swipe gestures — that let users move between a messaging bubble showing the current sentence they’re translating to view that text within the context of the surrounding sentences in the document (swiping the other way to see the proximate sentences they’ve already translated) so the overall translation quality does not end up chopped into little pieces too.

Stepes is launching today on Android, with an iOS app due shortly — it’s currently in review with Apple. A Windows version is also planned for the future.

As with existing translation business models, the pricing for translations is a per word model. Per word rates will vary depending on factors like the target language and subject field, with Yao saying they might range from 3c to 10c per word. They will also vary depending on how long a translator has been working via the platform, with better rates for people who clock more years translating via Stepes.

How will Stepes ensure quality translations, given it’s opening up its platform to anyone who claims to speak another language, not just to professional translators? As with other on-demand approaches there’s a built in review system — so translators are rated on every job they complete, helping to surface better translators on the platform.

“This is almost like crowdpolicing. If you don’t do a good job you will be ranked very low… Stepes linguists are going to really be paying attention to everything they submit because they know they are ranked, and the translation will have their identity connected to it. If they don’t do a good job they will be ranked low — whether there is translation accuracy or slow performance, not on time performance, so that itself we think it’s a very important driving factor for improved quality,” he says.

Yao also argues that opening up to non-professional translators who might be subject matter experts in certain other fields — they might be a professional engineer or doctor, for example — will also help raise quality of translations when having that specific expert knowledge might be helpful to a specific translation task.

“The users will understand the subject matter better than the professional translator,” he argues. (Although it remains to be seen how many doctors/engineers have time/incentive to do small-time translation jobs in their spare time — presumably as many as have time to be Uber drivers outside work hours…)

While CSOFT is hoping to push Stepes to the 100,000 professional translators it already has on its books, it will also be doing some pre-screening of new sign-ups — including a screen translation test — again with an eye on quality. The platform will also have ongoing “selective reviews”, where a translation can be automatically reviewed by a second translator in a “professional category”, says Yao.

Translators will be paid for completed translation jobs via an in-app wallet — with various transfer options such as the ability to withdraw to PayPal. While customers paying to have documents translated via Stepes will be able to log into a desktop version of the platform to see their translation happening in real time (if they’re curious).

And Stepes’ target small business customer base won’t want to push poor quality translations at their customers. In other words, never ask a machine to translate your document when you can crowdsource a human to do it instead.

“So that’s why it’s next to impossible, at least for the immediate future, that a machine will ever be able to match human translation.”

Click here to view the original article on TechChrunch.

CSOFT Swipes Left for Translation, Right for the Source to Mobilize Translation